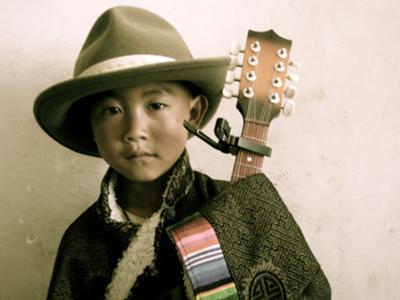 The Tara Café Project promotes the cultural continuity of Tibetan music. Live performances, recordings, and film documentation involving Tibetan artists, both inside Tibet and in exile, are supported.

The Tara Café Project began in 2003, taking its name from a small cafe in Dharamsala, India, where refugees from the Amdo region of Tibet often gather to visit and play music together. That year, the Tara Café Project CD was produced, featuring the music of Gompo Kyab and Gompo Dhundup. These two talented musicians were living in exile in Dharamsala, home of His Holiness the Dalai Lama.

In the summer of 2005, Gompo Dhundup and fellow musician, Jamyang Yeshi, were invited to Canada to perform at the “Cultures at Risk” Summit at The Banff Centre. Their music was recorded in India and at the Centre, and the CD “The Karma of Snowland” was released. The most recent CD, “Shining Spirit,” was recorded in Tibet and in Canada in 2006 & 2007, In 2009 we released the film, Shining Spirit: The Musical Journey of Jamyang Yeshi, which documents the recording process that led to the Shining Spirit CD.

In 2006 the Tara Cafe Project initiated a Children's Education Project in Amdo, Tibet. Currently we are funding the education of 20 nomadic children, as well as the salary of a Tibetan teacher and the college education of a young nomad man. We have also donated funds for operating expenses for several schools.


FOR MORE INFORMATION PLEASE SEE OUR WEBSITE AT www.taracafeproject.ca, or go to our Facebook Page at facebook.com/shiningspirit