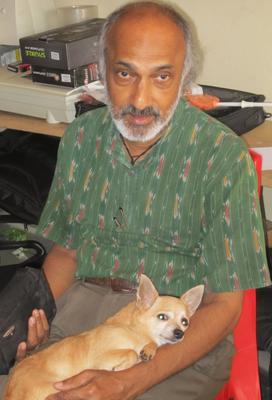 You might think I am just being romantic or doing some reincarnational hallucinating, but there is a big p.s. to the memorial I previously wrote about my dear Shih Tzu Gunji. After she past on at the age of 11, my husband and I were very very sad. Our two Great Danes tried to cheer us up, but she was such a darling and 11 years wasn't long enough with her.

A year after she died we moved to India. A few months later I had to return briefly to the U.S. and this thought persisted in my mind that she would come back to us in another doggie form. It wasn't just a wish---which, of course, was there, too, but also a real feeling that she was still there, knocking on door of this world to come back to us. I started having these ideas about how good it would be to have a small dog to travel with all over India in trains and hotels. When I got back to Florida, I met up with a friend in Gainesville who once had 14 Chihuahuas, and he suggested taking a ... chihuahua! ... back with me.

I started looking at the newspapers, and found a few breeders with puppies. One, in a woods hung with moss on the banks of the Suwannee River, had one golden girl puppy left, who became our Suwannee. I had thought a bicolor would be fun, yet this little girl ran all the way from her backyard kennel as fast as she could to meet me. She had beautiful conformation, a perfect classic body and head, not one of these poor little distorted "apple heads" that is today's in-breeding fad. I took her to Miami with me and arranged for her flight back with me on Lufthansa, only to find that they wouldn't take a puppy under three months' old. So, naturally, I had to tell my husband I was staying on another month!

What a traveler this sweetie was! Flew under the airline seat without a peep. Made a puddle only on a newspaper I put down in a corner of the airport terminal in Frankfurt, and flew on to India without any problem, happily eating normally on the way. This foretold her behavior in every upscale hotel, every train compartment, and every restaurant she went in her black Samsonite dog carrier for the next 11 years in India. She traveled with us from the Himalayas to Kanyakumari and Rameshwaram, was dipped 22 times in the holy teerthams at the Rameshwaram temple on three occasions, swam in the Ganga, was blessed by the god oracle at the famous dog-oriented Parasinakavu Temple in North Kerala, and went to so many other temples it was unbelievable. Three times she walked up (and was partially carried) to the top of Mount Arunachala in Tiruvannamalai, Tamil Nadu.

Her personality was amazing. Like many chihuahuas (and people), she was not impressed by the human race in general (and children in particular) and considered being our bodyguard her dharma and favorite duty. Her food habits and so many behaviors were identical to Gunji, our Shih Tzu. Like Gunji, she only lived 11 years, too. An animal psychic friend described her condition after passing and said she was so happy in her new state "she could almost pee." That was so like Suwannee when she was the most excited (only after a long absence). Finally, within a week, she said she had lost her animal form and had merged with "Spirit." Maybe she's due for a human rebirth ... poor baby! Good luck to this marvelous little dear!

Join in and write your own page! It's easy to do. How? Simply click here to return to Dog Memorial.