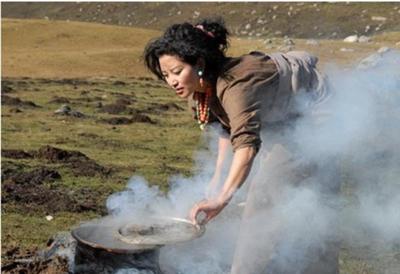 Picture of breakfast cooking on the Tibetan Plateau.

I like your site, found it very interesting.
Are you Tibetan? Just curious...
Do you have a good Tibetan breakfast recipe?

Thank-you for your question. I am not Tibetan although I am called an Amdo Namma or Amdo wife as I am married to a Tibetan man from the Amdo region of Tibet.

Tsampa, the national food of Tibet is made out of roasted barley flour that is highly praised and is considered a rich and healthy food.

They add this to tea or water (and sometimes beer!), butter and soft cheese. The Tibetan people mix it all together very well and make little round balls and eat these with tea.
It's called 'Pak'.

There are slightly different recipes for this of course depending on the region of Tibet.

The Butter and Cheese are from the female yak which is called a Dru or Dro (actually the sound is half way between these two words.) If you say 'yak milk', you may hear a snicker or two behind you...

When my husband first arrived in Canada, my father took him to the local zoo to show him the 'pregnant yak'. Hubbie thought that was pretty funny but was too polite to correct his new father-in-law. Smart boy...

Don't eat much the first time you try this as it is a bit difficult to digest, I learned this the hard way!

In Dharamsala, India where I was living, many of the Tibetans were just eating delicious homemade bread with their tea as it was readily available and good quality tsampa was sometimes hard to find.

I like to make tsampa porridge sometimes. Heat up some milk (regular milk!) on the stove and spinkle in tsampa flour slowly and stir quickly until it is as thick you want.

It's delicious with a bit of sugar or maple syrup.

Join in and write your own page! It's easy to do. How? Simply click here to return to Tibetan Questions and Comments.