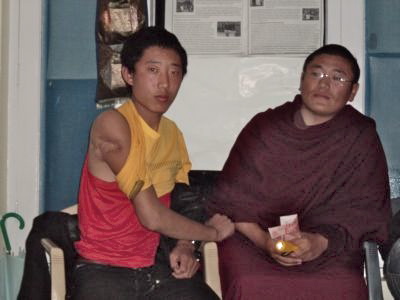 I read this article today and was deeply affected by this young boy's eye witness account. These acts of oppression, genocide and cold blooded murder continue by the Chinese government unabated and without penalty. How is this possible in this day and age?

From 'Learning and Ideas for Tibet' (LIT)
Written by Kimberly Hauselberger

I have just had the profound experience of hearing a newly-arrived Tibetan exile speak of his last months in Tibet. Dorje Rinchen, an 18 year old monk, arrived as a refugee in India on November 6th 2009, and bravely and solemnly told his story at the LIT 'Tibetans Talk' night, ten days later, on the 17th November. The following is what we heard:

On the second of April 2008, Chinese police arrived at his monastery in Tongkor Township, in the Kham region of Tibet and tried to coerce the resident monks to renounce HH the Dalai Lama. The monks refused to participate, and the police later left without incident.

However, they returned along with armed forces early the next morning at around 4am, and surrounded the monastery. They stormed the premises, and searched the monks' residences. Monks were tied up whilst their personal items of any value were confiscated. Those found with photos of HH Dalai Lama or the Panchen Lama were beaten, and the pictures were piled up and destroyed. An elderly senior monk and our teacher, Geshe (Doctor in Buddhist Philosophy) Sultrim Tenzin was arrested and taken to prison.*

After ransacking the monastery, the police left, and the able-bodied monks resolved to take a stand against this violence. After meeting at the monastery's debating ground, they walked to the local Chinese government office in order to protest against what had just occurred.

Many local Tibetan people also joined in the protest, calling for Geshe Sultrim Tenzin's release. As night fell, a crowd of about 700 protesters had gathered, chanting slogans such as "we want freedom from China" and "we want basic human rights".

Police and army officials then surrounded the protesters, and without warning began to shoot at the unarmed crowd. People immediately fell to the ground for cover. As soon as anyone stood up and tried to escape they were intentionally shot at.

Dorje explained how he tried to run from the police, but was shot in the shoulder. *at this point he showed the audience his bullet wound.

He fell to the ground but managed to take cover by crawling and hiding behind a nearby tree. However, he was not yet out of danger as the police continued to intentionally shot at him. Fortunately, the tree acted as a shield and the bullets bounced off it. Whilst hiding behind the tree, Dorje tried to help another fellow protester, a young girl, around 14-15 years old, who had been shot in the chest, by taking of some of his robes and tying it around her in order to stop her profuse bleeding

Whilst incapacitated, he was witness to the murder of several of his fellow protesters. He saw two women shot in the chest, he saw several people shot in the back as they tried to escape, and he saw people trying to carry their dead relatives away from the scene.

At this point in the story, he pointed to poster hanging in LIT in which there was a photo of a young girl, Tseyang Kyi, 23 years old.

He explained how he had seen her shot and watched as her brother tried to save her by carrying her on his back away from the protest but after only a few moments, she died.

He also witnessed a monk, Lobsang Rinchen, calmly stand, raise his hands in the air and say "If the Chinese Government wants to kill Tibetans, then let them kill me". He was then shot in the forehead.

He then spoke sadly about how he had gone to the protest with his Uncle but after the protest he had disappeared and they still don't know where he is. They believe he has been killed by the police.

More than 80 protesters were killed, wounded, or have disappeared due to the events that occurred on this day.

Fortunately, Dorje managed to make his way back to his monastery, despite heavy blood loss from his wound. When he returned his fellow monks took him to a nearby mountain range to recover, and he remained there for one month, in order to hide from the police, who had begun arresting his fellow protesters.

As he had not been placed on the Chinese government's most wanted list he was able to return home. However, he could not go to hospital or receive proper medical attention as this would alert the authorities to his involvement in the protest.

For this same reason, he tried to remain anonymous in his village and often went hiding in the mountains during the preceding year in order to avoid the attention of the authorities.

In the days and months preceding the protest the local Chinese police carried out an intensive search for protest participants which included the arrest and torture of the family members of suspected protesters.

People who were arrested for attending the protest were sent to prison for extended sentences without trial. For this reason Dorje decided to flee the country, and joint the thousands of other Tibetans in exile.

He traveled to Lhasa and found a guide to take him into Nepal for $15000USD, and crossed the border several days later, but he did not want to give details of his escape.

He said "I say sorry, I don't want to say how I escaped to Nepal because a lot of people who protested still need to escape and I don't want to jeopardize their chances".

He arrived at the Tibetan refugee reception centre in Dharamsala on November 7th, with no friends, no family and no possessions.

His family did not know about his escape and have no knowledge of his currents whereabouts as he did not want to jeopardize their safety.

Despite never having made a public speech before, or even told his story to any organization or government department, he humbly shared his story to a bewildered and heavy-hearted audience at the LIT event. When asked about his feelings as a newly arrived exile he quietly explained that whilst he feels sad for the loss of his family and friends, he feels a greater sorrow for the Tibetans he left behind who are under the constant oppression of the Chinese.

When asked how he feels being in Dharamsala, he responded: "I am not happy. I am so sad especially when I remember those who were shot in front of me. And I miss my family so much". This brought many to tears, including the translator.

When asked about the current situation in his monastery, he furthered these sentiments stating "I am so sad here but those in Tibet are sadder than me because they are forced to go Chinese socialist meetings and their situation is worsening as the oppression of the Chinese is only getting stronger".

When the audience promised to spread his story he responded "thank you for your promise. Tibet is not just an issue for Tibetans, it's a world issue, it's a fight for peace and justice, which is everyone's responsibility".

LIT has published this incredibly heart-breaking story to you and ask you to forward it on to as many people as you can, so we can fulfill the promise we made to Dorje. Lets fight for peace, justice and human rights in Tibet.

Join in and write your own page! It's easy to do. How? Simply click here to return to Where does Tibet go from here?.